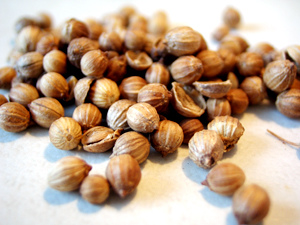 Like the sister spices of nutmeg and mace, coriander shares its source plant with another distinct flavor; cilantro.  The plant is about 20″ high and has soft slender, lobed leaves that look a little like parsley.  The leaves are known as Chinese parsley, cilantro and coriander leaves. The seeds or fruit are coriander.  They are harvested, then dried and used as a spice. The leaves can be used fresh or dried. Coriander plants are native to Southern Europe and Northern Africa as well as Southwest Asia.

Coriander is a small, almost round, ridged seed ranging in color from wite to yellowish brown. Cilantro, the leaves, are a dark green color. Both the leaves and stems are edible. The stems are best if used when tender.

There is a distinct difference in the flavor of coriander seeds and the herb cilantro. It’s not uncommon for a person to enjoy coriander and be turned off by the taste of cilantro. Coriander is often described as delicate with warm, slightly nutty taste with citrus overtones. Some identify orange where others taste a a combination of lemon peel and sage. Still others hone in on a caraway – cumin mixture. Cilantro or coriander leaves or Chinese parsley has a very bright, fresh taste with a certain unmistakable tang to it. 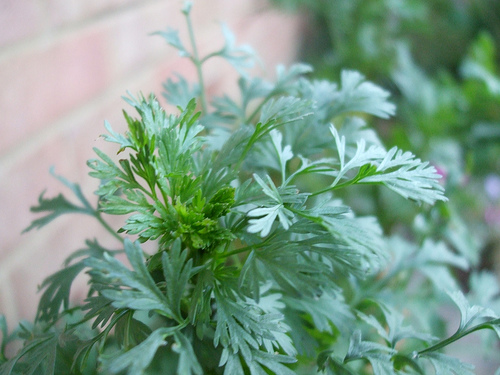 When it comes to cilantro you either love it or hate it. Those on the flip side taste soap or as the herb equivalent of a stink bug. One person lovingly compared it to turpentine. I like cilantro but certainly won’t hold it against anyone who falls in the turpentine/stink bug category.

Both cilantro and coriander lose their flavor quickly. Cilantro is best used fresh and is a popular addition to Mexican and Carribean foods such as ceviche, salads and salsa. Fresh ground coriander is the only way to truly layer in its lovely flavor. Roasting the seeds whole then grinding them unleashes a  deeper taste that leans closer to the caraway – cumin description. Preground coriander that’s available in the stores provides a mere shadow of its flavor potential. Might as well shred some cardboard—tastes about the same. Coriander is a key ingredient in gin (which is a specialty vodka). It’s delicious with apples, breads, tomatoes, tomatillos, cauliflower, gingerbread, beer and citrus. It’s a key ingredient in curries and mole sauce. Try it in pea soups, chicken, eggs, meatloaf and in hummus.

Coriander is an ancient spice with a romantic and exotic history. It grew in the Hanging Gardens of Babylon and was one of the medicinal plants mentioned in the Medicinal Papyrus of Thebes which was written 1n 1552 B.C.  I’ll ‘fess up:  found this information in an awesome book called  The Spice Cookbook by Day and Stuckley. Wish I could tell you more—but this bit sounded too cool to leave out! So consider yourself officially armed with a totally random bit of spicy trivia.

Here’s a 5 Minute Spanish Everything Sauce featuring a coriander spice blend. It literally takes 5 minutes to make and is perfect for fish, vegetables or poultry.

Buy spices online at My Spice Sage where they sell bulk coriander seeds at very reasonable prices. My Spice Sage is always offering a cool freebie with your orders. Their current special is a complimentary sample of ground Ceylon cinnamon.