3 Ways to Have Spices for Breakfast: 1 indulgence, 1 blend, and 1 surprise

Good morning sleepyhead! What’s waiting for you on the breakfast table? Spices? Why not? Increasingly, more studies are revealing the healthy benefits of spices. Plus a little change-up in morning food lineup for some a.m. motivation is always welcome.

Here are 3 new ways to eat your spices in the morning. One is sheer indulgence. One is a blend. And one is an unexpected surprise.

Cinnamon in the morning is no surprise and bacon is everywhere. Bacon band aids

anyone? A bacon bendy action figure

? My favorite is the  Vosges Bacon Truffle collection.

Back to cinnamon bacon: Marrying cinnamon to bacon is a good match. The cinnamon and brown sugar melt together coating the bacon creating something sweet, savory and totally addicting. If you have trouble waking up in the morning think of cinnamon bacon. The snooze button won’t even tempt you.

Bake until bacon is just crisp and sugar is bubbly, about 20 minutes (more or less, depending on the thickness of the bacon slices). Let cool and serve.

Tips: This is a great recipe for a brunch appetizer. And if you don’t have a broiler pan you can improvise with heavy, crumpled aluminum foil. Basically, you want something that will elevate the slices and catch the drippings. You won’t get points for aesthetics but it works! 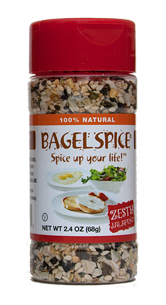 Bagel Spicesent me a bottle of their new Zesty Jalapeno blend to see what I thought. First, a disclaimer – I’m receiving absolutely nothing for this review. No commission, no affiliate…just the satisfaction of announcing to the world that this stuff is AWESOME!! Bagel Spice has found that perfect place where you taste heat for its flavor and framed by a touch of sea salt, garlic, onion and a parade of seeds. White and black sesame seeds, poppy seeds, and black caraway seeds (not to be confused with nigella).

Bagel Spice is an ingenious approach to bagel lovers of the everything bagel. You know if I’m talking to you! Read the Spice Sherpa review of the original Bagel Spice flavor. So far I’ve sprinkled my Zesty Jalapeno on cottage cheese, crêpes, scrambled eggs, tomato juice, salad and salmon.

Banana. Yogurt. Fruit juice. It’s the classic smoothie trio and while delicious it gets a little humdrum. Smoothies are made to be embellished. You don’t need an overwhelming dousing of spices just a little pinch here and there.The following four suggestions use a basic smoothie base of SLICED frozen banana and yogurt, either plain or vanilla, plus a little fruit juice. I find citrus too strong and prefer apple or pineapple.

Start with the base then add any of the following combinations:

If you want some specific details on making a spiced smoothie, I’m going to send you over to the Mistress of Spices for her Bollywood Smoothie. We have very similar tastes when it comes to smoothies and she’s as adventurous as I am in tossing the proverbial spice cupboard into the blender.

Now you have what it takes to have a truly good morning.