If the title sounds like something out of Pirates of the Caribbean, there is good reason. September 19 (today) is National Talk Like A Pirate Day. The action is worldwide, I had to get Spice Sherpa in on the fun. Here are 3 things to get you going for the day.

Ye be warned–thar be no goin’ back once sailin’ beyond this point.

In between plundering and treasure hunting what’s a literate, food-loving sea wench or sailer to do? Crack the spine of a true story–a yarn filled with (take a deep breath) rogue adventurers, gentleman explorers, headhunters, native islanders, looting, thieving, mutiny, desperate battles, love and cargo holds full of treasure. Treasure of the spicy kind. The Caribbean may be the place for those legendary names in pirate history like Blackbeard and Anne Bonney, but Europe had its obsession with spices.

Here’s the 2-second summary: In the 1600’s the Dutch landed on Manhattan, named it New Amsterdam and then later gave it to the English who renamed it New York. This entire discovery and exchange is owed to nutmeg… specifically to the unbelievable sequence of events between Europe and the spice islands (one very small island in particular) which culminated in changing the course of the world’s history.

Here’s one thread. During his search for the valuable spices one rogue English captain pirated another ship. He and his crew were celebrating their victory when a Japanese junk appeared on the horizon. Pleasantries and drinks were exchanged and the English allowed the junk’s crew to board their ship for a tour. The instant the Japanese were on board, swords were drawn and the English crew soon found themselves battling for their lives and ship. (I’ll let you read about the cliff-hanging battle. Disney couldn’t script it any better). 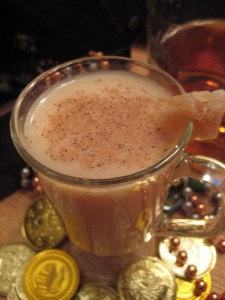 A day dedicated to pirates? Gotta have rum. I spent the week perfecting a tasty little concoction I call Rum Treasure. It has ginger syrup, rum, chai tea, a splash of cream, and a pinch of garam masala for a garnish. I sent the recipe over to Ancient Fire Wines so just follow the link to the post. It includes a recipe for the ginger syrup and for Rum Treasure. And while you’re there take a tour of Jason’s cocktail lounge archive. You’ll love it.

Well, many pieces of eight. As in Wall Street. Here’s a factoid. When the Dutch established their presence on Manhattan Island they built a fort identical to the one they built on another island that they successfully took over: Run in the Spice Islands. Run is the tiny droplet of land that was the primary source of nutmeg. Wall St. is named after the wall that surrounded the duplicate Manhattan fort.

Disclaimer: I wish I could give you a source for this nugget. I just remember reading it as I cruised through a pile of spice-related articles. So take it for what it’s worth.

So me maties! What say you in the adventures of ol’ pirate land? What grabs your fancy? Be it spices, literature or random fun—share your thoughts. I’m not likin’ to sail alone. Savvy?