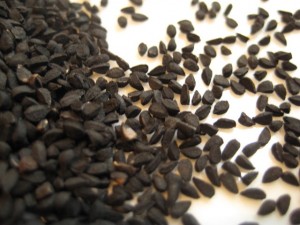 Have you met nigella? Chances are yes, but the spice was probably traveling incognito. Charnushka. Black cumin. Black onion seeds. Black Sesame seeds. This spice goes by many different names which is too bad because it really merits its own pedestal. The seeds are black as midnight with a distinct edge running across one side. In their whole form they don’t smell like much but when you crack them open—wow!

Try it with tomatoes, squash, potatoes, or bitter greens. Sprinkle a bit of the roasted seeds on flat breads like naan or cook it into other breads. It’s good with meats. I prefer it with red or white meats with a richer vegetable-based sauce. Just last night I cooked up black-eyed peas with kale, sausage and onions seasoned with worcester sauce and healthy, heaping tablespoon of ground nigella. You can keep it in a peppercorn grinder and grind it onto your food like you would pepper.

Except remember, it’s not exactly black pepper or cumin. Which is why I call it the secret ingredient. Nigella adds a taste that is recognizable…almost…sort of…not quite…but definitely delicious.

Nigella is one of those spices that is like the flavor version of repainting or rearranging a room. It’s a flavor makeover for the same ‘ol, same ‘ol. If you love to cook this isn’t much of an issue but there are many people who get bored with healthy simple foods such as vegetables. Spices like nigella satisfy the taste buds without the need for extra sugar or fats.

I discovered nigella at our local public market (which was voted in as one of the top 10 in the U.S.A.  Congratulations Rochester 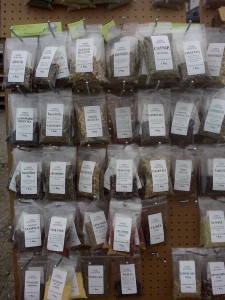 Public Market)! It was hanging in a non-descript plastic bag by the vendor Herbly Wonderful.  I snagged the last bag.

What food or spice discoveries have you made that add a unique touch to your cooking? Where did you find them?