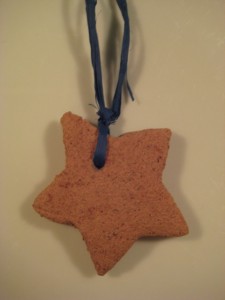 These ornaments come with a story. Last week my 10 year old participated in a trade fair at school. He left in the morning with a box of homemade beaded snowflakes and exchanged them all for a slew of 5th grade treasures. One of these treasures was a humble little star that looked like gingerbread.

As we  pulled it out of the bag we were hit with a holiday spice perfume that lingered like a pleasant little cloud over the dining room. Whenever the ornament moved it released a little more of its scent. We found it amazing because the star was completely dried and clearly meant to be a keepsake.

Being a spice sleuth I called the parent (who happened to be a friend of mine) and asked for the recipe. Her answer?

Cinnamon and applesauce. Oh yeah, and a some powdered cloves if you feel like it.

Her tips: Take care to mix the applesauce before measuring so the naturally occuring liquid is distributed evenly throughout the jar. Add more cinnamon if it’s still too runny. Or try powdered cloves.

My tip: Buy bulk cinnamon. You want fragrance and consistency so the luxury of true cinnamon isn’t necessary.

Her son’s tip: Substitute glue instead of applesauce for cleaner edges.

You can use these pretty babies as ornaments, gifts, or as an adornment for a larger present.

Studies have shown that smelling cinnamon boosts brain function. Since smelling involves inhaling microscopic particulate matter, my guess is that this is only remotely true with actual cinnamon. That Yankee Doodle scented candle won’t cut it. (Have you ever walked by that store? Headache!)

Gifts, holiday, How to, preserving