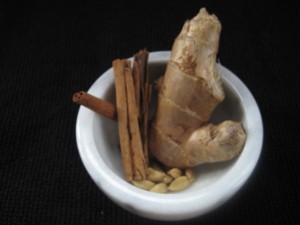 Between steroids, processed food, and and car companies this all-American tune may have a new connotation but the apple pie stands its ground. Apple pie is so quintessentially American we celebrate this dessert on two days: May 13 and Dec. 6th.

The rumor mill credits tarte tintin as the original apple pie. Perhaps. But it’s the Americans who created that savory, flaky crust, put it in county fairs, served it up on the 4th of July and made it a mandatory part of every summer picnic and Thanksgiving dessert spread alongside the pumpkin pie.

Apple pie is pretty straight-forward. There are variations on the type and amount of sugar, addition of raisins, type of crust, apple variety, how to slice the apples, etc. But an apple pie’s true personality is expressed in the spices.

Want to move beyond the standard cinnamon? Don’t omit it, just enhance it. Here’s an apple pie spice blend that takes just a few moments to put together and will blow away any pre-packaged blend that’s been sitting on a grocery store shelf for months on end.

Roast the cinnamon, cardamom, allspice and cardamom before grinding if you want a more robust flavor. I prefer this method for autumn dishes. Roast the spices whole before grinding them.  Put your spices in a dry cast iron skillet. Stir them slowly and consistently with a wood spoon or spatula over medium heat until fragrant.

Pssst. Sometimes I cheat and put ground spices in my toaster oven tray and toast them for a couple of minutes. Not as thorough but it releases some of the flavor.

Tip: if you’re using fresh ground ease-up on the amounts. And here’s the standard Spice Sherpa disclaimer: spices are a way for you to customize your cooking. Adjust to your personal taste.

What’s your favorite way to eat apple pie? Any secret ingredients you want to share with the internet world?