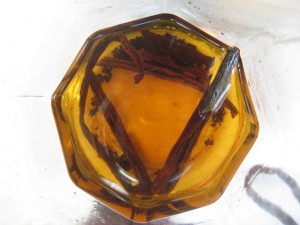 Vanilla is a such a staple of our spice cupboards we hardly give it a second thought. It’s time to change that. The best tasting desserts use top quality ingredients. When it comes to vanilla that’s an expensive statement.

Did you realize that you can make your own vanilla extract? It’s beyond simple. You need a mason jar, a couple of top grade Bourbon-Madagascar vanilla beans and some vodka. That’s it. You also need a couple months to let it steep.


Vanilla is one of the world’s most costly spices (after saffron or the unusual ambergris). So true vanilla extract is a small investment. Of course there are substitutes but they’re more like vanilla villains and not the real McCoy. When you make vanilla extract you’re guaranteed to have vanilla that is free from artificial colors, sweeteners, and flavors. Just for kicks, next time you’re in the spice aisle read the ingredients in “100% vanilla extract.”

But how cool is it to tap into your own private vanilla extract reserves for your recipes? You can also bottle it up and give it away as a present for just about any occasion (speaking from experience, the recipient will be so impressed).

If you want to give some as a gift snip off about a 1″ piece of bean and put it in the jar with the extract. Explain to the recipient that they can replenish their jar too.

P.S. The name Bourbon vanilla has nothing to do with the drink. It’s named after the Ile Bourbon the former name of an island in the Indian Ocean…and that name came from the France’s House of Bourbon. (Go here if you’re hungry for more on vanilla’s historic soap opera).