I Scream for Snow Cream!

That about sums it up for most of the country these past few weeks. What are you supposed to do when there is this much snow?

Spinning the freestyle way (I tried to embed the video but all I can give you is the link. Sorry.)

You cozy up by the fire and admire the serenity of it. 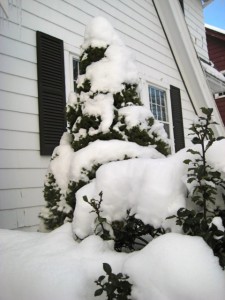 And if you still aren’t lovin’ the snow you can always EAT it!   That’s right, snow cream. I’ve always wanted to try this so when it dumped a foot of fluffy, sparkling white I knew the time was ripe.

Snow cream is snow mixed with cream and sugar to sweeten the deal. Snow cream makes a great base to easily experiment with the flavors. Don’t make life complicated; think mix, freeze and eat. I turned to spices to jazz things up a bit and decided it was the perfect time to try my sapote. Let me explain sapote because up until last October I’d never heard of it as a spice.

Last autumn during a trip to Montreal I stumbled across a fantastic spice shop at the Marché Jean-Talone. 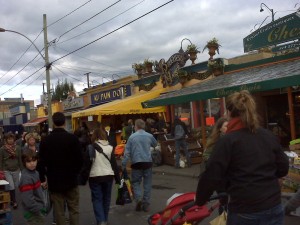 It’s called La Dépense or Epices de Cru and specializes in world spices from the deVienne Family. Being in Montreal the spice clerks didn’t speak a word of English. I dusted off my old French and the staff were very welcoming. As far as I know, I asked for something unusual but pleasant and tasty with sweets. 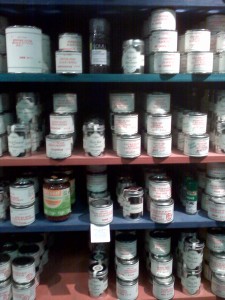 The spice clerk cruised the aisles and with a flourish pulled down a jar filled with what looked like almonds on steroids. It was a jar of sapote nuts. Sapote has a mild almond flavor with cherry undertones. It’s supposed to be good grated with a nutmeg grater into warm milk with honey…or…(drumroll)…snow cream!

I also thought I’d use a little nutmeg to brighten the flavor and vanilla because well, I add vanilla to everything.

So here’s the rundown on my version of snow cream. The entire thing was a big make-it-up-as-you-go experiment. The end result was quite tasty.

How to Make Snow Cream 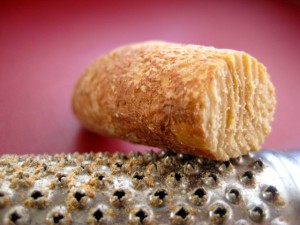 1. Grate the sapote and nutmeg. Blend it with the sugar.

2. Put this into a giant bowl. Next, collect your snow and add it to the bowl with the sugar. 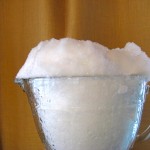 3. Add your vanilla then stir. At this point you’ll want to move quickly because snow does melt. Once the sugar mixture is distributed add your milk and cream. Stir like crazy. The consistency will look a little like mashed potatoes.

4. Once you’re done put it into a chilled container to store in the freezer to cure for a few hours.

5. Scoop and serve! The consistency will be similar to a cross between sorbet and granita. In fact the Italians started the snow cream trend with limonata which they made by adding sweetened lemon mixture to snow. 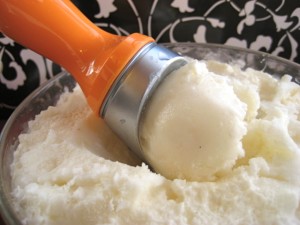 The verdict: Snow cream is tasty, fun and just feels like a neat thing to do. I probably wouldn’t serve it at a dinner party but everyone does like the novelty of it.

What about you? What do you love about the snow and have you ever used it as an ingredient?